A Virtual Walk Through of My 2014 Fake Journal

Lately my sketches have been getting larger and larger. When I came upon a windfall of mystery printmaking paper that was 22 x 30 inches and only 20 cents a sheet I couldn't resist using it for my 2014 fake journal. There were problems with the paper—it wouldn't take wet media without buckling severely. I restricted my media to various brush pens, or acrylic inks applied with a brush and some rubberstamp inks (sponged or brushed on). There's also a little bit of collaged paper here and there, but it's almost listless—a second thought while I was weak, a desire for more color on a paper I couldn't just splash it on, a nod to my original plan's hope of playing with composition.

All the images were made
1. From life (bird sketches mostly)
2. From several sketches I'd made previously from life of particular subjects (some of the people, all of the dogs)
3. From photos of friends and correspondents who responded to my pre-April request for photos I could work from, AND
4. From memory (the first entry 04.01.14 is a memory drawing of actor Stephen Fry—I'd been watching episodes of his "quiz" show while resting and hoping not to be getting ill, and I was too tired to think about sketching anything else. It actually sort of looks like him, though it's horribly unflattering.)

When I planned to work large for 2014's International Fake Journal Month I didn't know I was going to be ill and I had plans to meet with several friends and draw them from life in a large format. Being sick prevented me from doing that. The request I put out on my two blogs for photos to sketch from had been a whim—insurance to save me on any given day when I couldn't get out and sketch a life model. Instead those photos became the basis of the project, and I'm grateful that so many people wrote in and sent such outrageous photos of themselves, hamming it up for the camera. Never has there been such a group of universally attractive people so willing to mug it for the camera. I am grateful to each one of them for providing fuel for my pen, and lifting my spirits while I was "coughing up a lung."

At the end of May I was able to meet with my friend, the fabulous photographer, Tom Nelson to photograph these ungainly pieces. Using a friend's office space we hung a fake show of my fake journal, and Tom recorded it all for you, in the following images. Click on an image to view an enlargement, and read the transcript if the text on the pages isn't clear to you.

In the next couple days I'll get my wrap up posted. 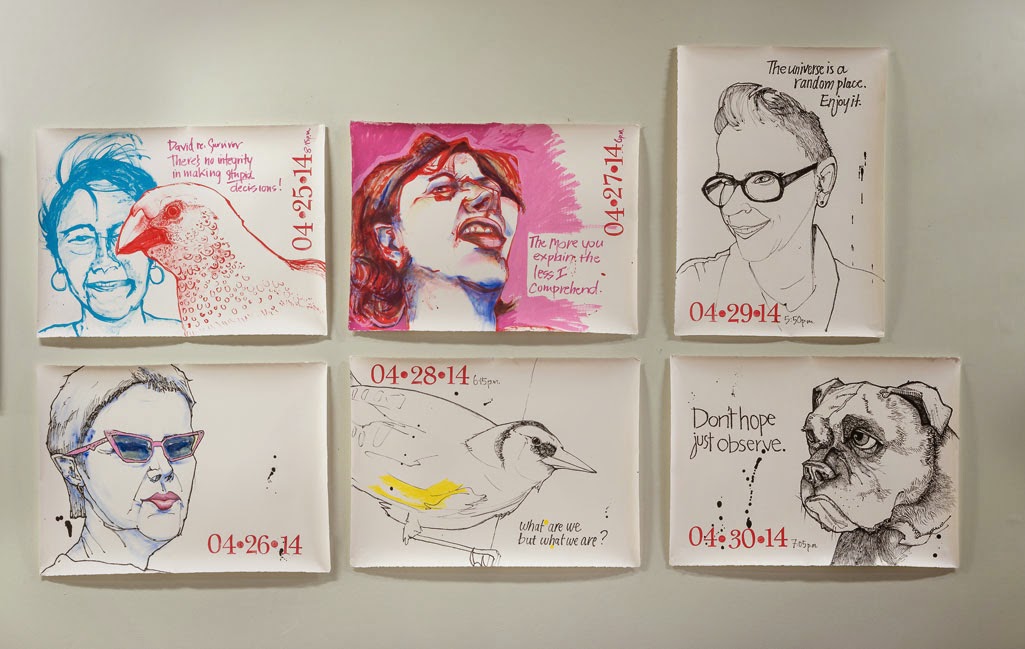 Below is a transcript of the text in my 2014 fake journal in case you can't see the writing clearly enough in the enlarged images.

It lurks at the edge of the counter—
skulking. [sic]

I more than half expect giant spiders—
Hairy Spiders—will crawl out of its leaves
while I lean towards it, against the
door jamb, brushing my teeth.

I jump back—startled at the thought
and tear my upper right gum line
with my toothbrush.

Everyone advises napping. I think they’re
obvious and WRONG. And it doesn’t
matter, I can’t nap.

When I lie down I can feel my brain expanding
behind my eyes. Each breath burns
and there is no expansion. I’m not out of breath I’ve
simply slowed my respiration rate below
what can be observed. And while I’m not
hallucinating I can hear the snap, crackle, pop of my
pillow’s foam in my ear, magnified to a
deafeningly loud degree.

Who can nap through that?

• What’s the line of intersection in appearance?

• What percentage of our expectation is needed
to create unease and a sense of imbalance out of
which change and growth can come?

04.13.14, 2 p.m.
Why is my chocolate habit under constant scrutiny
While all around me others dose themselves
With endless cups of caffeine?

04.18.14, 9 p.m.
Sure I’d love to travel with him, but I’d
Never let him hold the travel money.
He’d pay it all to a pedlar [sic]
for magical beans…
…the next morning he’d be surprised
when you didn’t want to rush up
the beanstalk to giantland.