Getting Ready for International Fake Journal Month 2014—No Explanations 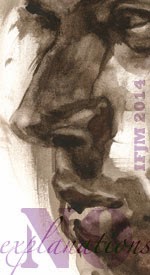 Left: The logo for International Fake Journal Month shown at the left in this post (and at the top of the right-hand column of this blog.

It's time to start gearing up for the 2014 celebration of International Fake Journal Month.

Of course that means a new logo and a new motto.

The motto for IFJM 2014 is: NO Explanations.

I've deliberately been a little fuzzy in the logo because I either have a massive migraine or think that this helps communicate the non-communication.

First some sad news. This year there will be no commemorative buttons. The project has simply grown too large for me to send out all the buttons. (The buttons are still affordable it's just the darn postage and the special padded envelopes that are pricey.) But not having buttons doesn't stop us from having fun. You can always printout this image and glue it to foamcore board, trim it and attach a pin back! Bingo, a button.

Now some good news. So many folks are participating it isn't feasible to send out buttons.

And some additional good news. When I selected the motto for 2014 I had in mind setting you all an additional task.

Don't gasp. You can still participate in the way you usually do—whatever has been working for you. But if you want to add another dimension to your participation I'm setting some additional parameters for you—actually in a way they've always been set, I just want you to pay particular attention: No explanations.

That's right. This year when you keep your fake journal I want you to pay particular attention to the "reality" of what your character would or wouldn't know, what he or she would or wouldn't write in his or her journal. I'm encouraging you to take the verisimilitude of your project up a notch.

So for instance if your character is meeting someone or experiencing something for the first time he (or "she" understood for the rest of the post or I'll get bogged down in double typing) would probably note something down about that person or thing. But what exactly would he note down?

He might complain about his job, but would he really go into hyper detail about little indignities he can't forget? Might he not just gloss over such things? Or would he keep a detailed list because he's obsessed with "justice" (and maybe just a little scary).

You'll have to decide how thorough your character is. Some might just note a name of a new person they meet, others might write a phone number and address, or a line or two of text describing the person or the thing they are observing.

That's one level to this: how observant and diligent is your character?

Another level to all this is that I'm encouraging you to have no explanations. JUST DIVE IN and whenever possible check yourself before you explain. Is it that important to your character that he explain something or is it important to YOU. If the latter, then leave it out.

This is another way of distancing yourself from your character. It is also a way of changing your character's mode of interaction with the journal.

And if you can distance yourself from your character, then those of you who like to participate in this event in order to set greater distance between yourself and your internal critic will immediately find a greater safety cushion of distance.

It may feel more uncomfortable because your normal mode of journaling is to explain everything. But for this project's duration stick with it and give it a try and see what benefits you can derive. You may end up with a greater respect for your own ability to detail your life when you're done. Or you may come away freed from the restraints or "work" of explaining everything all the time.

One of the goals of IFJM is to help the participants explore new ways to interact with their journals when the project ends. By setting very specific goals and parameters on your fake journal, that are different from your usual behavior, you'll be able to maximize those results.

Now if this sounds all too complicated or uncomfortable to you, or if you find it goes against your plan (good for you for already having a plan for 2014) for your fake journal, DON'T WORRY ABOUT IT.

Go ahead with your original plan. Just keep your character in mind.

The most important thing is that you participate and explore different ways to interact with your journal.

For some IFJM Participants you've already been exploring the no explanations approach by being extra vigilant about what your character writes down. You've already analyzed you're own journaling process and found yourself hyperdetailed or very non-explaining already. You know your character would never stop in the middle of his fake journal and write introductory paragraphs about his mother because he knows his mother. Nope, not in the journal you're creating. So if he had the need (for whatever reason) to introduce information about his mother you found some sly and realistic way to get it in. Fantastic.

This is something I want you all to think about as April arrives.

I do believe it is important that we all look at how we normally journal, and then distance ourselves from that normal journaling through not only the choice of character (perhaps a different sex, age, city of habitation, occupation, etc.) but in the methods employed by that character to journal. Things that make up that character's voice. His response to his world.

Explore that response; set yourself up to be able to do that. Then sit down every day in April and have some fun.

For now, take some time to select a journal to work in, and spend a little pre-event time with your character so you know what materials he might use in his journal. I'll have more to say about this in March.

I look forward to seeing your fake journals.
Posted by Roz Stendahl at 4:00 AM

I have just discovered you and your group and I am so excited to join! My head is about to spin off my shoulders!!!!!!! So, I will check out the 3 links you posted, anything else I need to do? Is there a FB group? Do I subscribe to a blog or email or anything? I do NOT want to miss ANYTHING.

Annette, don't worry, this isn't the type of experience you can miss anything of, really, since it's something that you create for yourself. Just check back here every once in a while to look for suggestions and tips. (I tend to post these in February through March of each year—this year I just started posting on March 3.) Then during April you'll see posts about my journal and progress as I have time to scan or experiment with stuff and sometimes there are updates from other folks.

The main thing you should look for is people who've started to post their fake journals on their own blogs (or blogs dedicated to that purpose) get listed in a participants list on the side of the blog. (you can see lists of links for past years there right now.)

That will help you see what other folks are doing.

But not everyone shares their fake journals publicly so don't worry if you don't feel like you want to.

I ask people to do a wrap up about their experience in the first week of May and share those.

Start thinking about your character and the book that character will work in and the media you'll use.

I'm so glad you're going to give it a go.

This will be my first year participating in IFJM! Very excited to see what others will post!

Gah! My character... actually lack of a character... is giving me fits. I have a journal, media and an art goal; I just don't know who my character is and why she journals. If I don't get an inspirational lightning strike I guess I'll just have to dive in and see what happens.

On the bright side... I've made my button!

Dana, You asked a timely question. I was writing a post on it for next week. I have posted it today instead as an answer to how to get the inspirational lightning to strike. It's today's post
http://officialinternationalfakejournalblog.blogspot.com/2014/03/whos-my-character-why-does-my-character.html

check it out. Good luck. I hope this is a great year.

Hi Roz,
I read about your project yesterday on Pinterest and haven't stopped thinking about it! This morning I got working creating the journal in a style I do not normally do. Reading this post about developing a character and the idea of creating a separate blog to share it sounds like so much fun!!
Count me in!
Susan

Susan, thanks for your note. I'm glad you got the IFJM bug! Check out the post I put up on the blog this afternoon talking about how I set about setting the goals and parameters for my 2014 fake journal, it might be of help for you as you start out new to this process.

And when you get 8 entries up be sure to write back to me with a link so I can put you on the participant's list!

OMG Roz, this is so much fun. I have created a new journal, created my character, and made three entries from her perspective. I just wrote about the process in my blog. I can't tell you how much fun I'm having. Thank you for such a brilliant idea. Here's my link: http://illuminationsart.wordpress.com/2014/04/08/fake-journal/ - Thanks, Marianne. :)