Wrap Up Thoughts for 2011: Artist Mimi Holmes Shares Her Thoughts 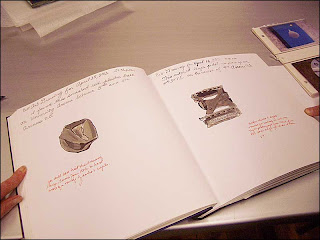 Above: A page spread from Mimi Holmes' 2011 fake journal. Here her character, Emma Jane, a sixth grader, is drawing trash using pens. I did not get a photograph of the earliest pages where Emma Jane worked only in pencil. At the top of the page you'll see Emma Jane's notes. Below her drawings in red ink you will see comments by Emma Jane's teacher, Mrs. Andersen, along with a grade: a check plus or check minus. Click on the image to view an enlargement. Artwork ©2011 Mimi Holmes.

I was privileged to see Minneapolis artist Mimi Holmes' 2011 fake Journal on Saturday. The lighting wasn't great, but I took a couple photos to share with you. Before we get to Mimi's comments about the project I wanted to share a little background about her fake journal with you.


If you would like to see some of Mimi Holmes' fiber art and paintings please go to  MNArtists.org and enter her name in the site's search engine. Images will then come up in a list for you to view. 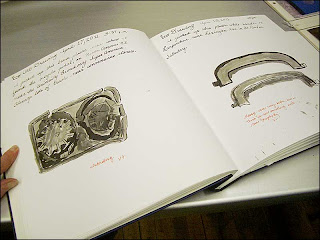 Above: Another pen and ink page spread from Mimi Holmes' 2011 fake journal. Click on the image to view an enlargement. Artwork ©2011 Mimi Holmes.
Mimi used a large (10 x 15 inches?) scrapbook-style book (with a stab spine). She purchased it at a sale for $1.49! The price tag was still attached. Mimi's character, Emma Jane Randall was a sixth-grade girl taking part in a school drawing project. She picked up junk everyday and drew it. Later she started to take photos of it (because of a fictional teacher's request for photos). The journal is filled with her "sixth grade" handwriting which Mimi mimicked perfectly; the sketches; the teacher's comments (in a different hand); the photos; and some final reports required by the class. 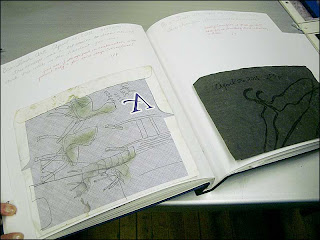 Above: Another spread from Mimi Holmes' 2011 fake journal. Here Emma Jane had transitioned to drawing on the trash she picked up. Click on the image to view an enlargement. Artwork ©2011 Mimi Holmes.
Here's what Mimi wrote about her experience in April:

I think I learned how to make the best of it as I progressed.   I certainly didn't know how it would turn out when I began it.

Mrs. Andersen  being so critical inspired me to have the extra credit options...  and the shows at MCM and Textile Center fit beautifully.

I knew starting out what the first three weeks parameters of materials would be: pencils, markers, liquid ink.  Didn't figure out the fourth week ( drawing on collected trash) until rather late in the game as I was hoping to do the chicken writing on found trash, but I couldn't figure out how to make that work given what had already progressed in the journal.

I'm not sure if I am disappointed or not about starting a blog and posting pages on it.  I enjoyed going to the blogs of others, but didn't leave any comments.  I worried I would not have time to post on my blog daily.  I photographed daily at first ( the whole page); then it became easier to do several pages at a time, and to photograph several days objects at a time as well.  Then resizing images on the computer!  Probably spent as much time on that as drawing.

I liked seeing it build up and amount to something over the month.  That's the key to all artmaking, I think: do  at least a small amount every day and over time it really adds up!

The color type emphasis at the end of Mimi's comments is mine. I couldn't agree more. I also think it is important to let art projects evolve. It's great to have parameters (and I suggest that here in posts on preparation) but it is important, once you get immersed in a project to let the life of the project evolve. Mimi's fake journal clearly did that, as she moved through the month and allowed her character to respond to the "task" at hand in creative ways. Above: In this image you can see a page spread where Emma Jane was drawing on trash, along with the photos (above the journal) her teacher asked her to supply. To the top right of this image you can see some of the actual trash items that Mimi used for this project. Click on the image to view an enlargement. Artwork ©2011 Mimi Holmes.

Mimi's summation also addresses something that I think everyone needs to be aware of. It's more important to keep making the art than posting it. Sometimes it seems to me that the best way to deal with IFJM would be a simple video flip through at the end of the month, when it's all over. Each artist has to decide what works best. For some, the daily posting spurs them on. For Mimi, I know in part the posting was difficult because she had such a large book and it was difficult to scan or photograph. I dealt with a larger than normal book myself this year and was not happy with the time it added to the "business" of posting.

Thank you Mimi for participating this year and for sharing your fake journal. I love all the aspects of it and the wonderful insights Emma Jane has along the way.
Posted by Roz Stendahl at 5:00 AM

I agree - having a larger journal that doesn't fit on the scanner could be VERY problematic. The 8-1/4 x 5-1/8" moleskine that I was using "just" fit but required precise positioning.
I do like to "scan as I go" so that I don't get bleed-through from subsequent pages. For me, it helps my momentum.
The "video flip through at the end of the month" is a great way of getting an overall sense of the project. I'm glad I did it for my 2010 book, since that one is no longer in my possession. Will do it for this year, once I get the book finished (more than 30 pages, didn't stop at end of April).

Anne, like you I like to scan as I go. But I have hopes in upcoming years (I don't know when this will be) to go through the entire process and not scan anything until the end, just to be a person who doesn't scan for 30 days.

This year, having a large book (I ended up being able to scan a page at a time and join the spreads in Photoshop—originally I feared I'd need to do 3 scans a spread) actually slowed me down. I'll aim for smaller books in the future.

I love that your 2011 fake journal is going to be longer!